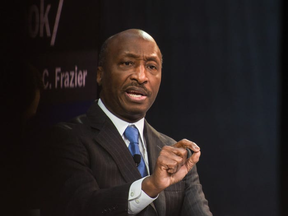 Frazier is the chairman and CEO of Merck & Co. (known as MSD outside of North America). After joining Merck & Co. as general counsel, he directed the company's defense against litigation over the anti-inflammatory drug Vioxx. Frazier is the first African American man to lead a major pharmaceutical company (part of the Fortune 500 companies). He was elected to the American Philosophical Society in 2018. (After Wikipedia)

As the US vaccination effort winds down, production will likely continue at plants around the world for further distribution, whose details are still being debated.
Mar 10, 2021 | Link | 0 Comments
Understanding "Herd Immunity"
Oregon Public Broadcasting has produced an easily understood explanation of the concept and how it could help return us all to a normal routine. Follow the link to view the video.

Feb 24, 2021 | Link | 0 Comments
Is your device safe from ad-hackers?
Cybersecurity researchers discovered malware earlier this year that was draining people’s Android smartphones and ballooning their data bills by secretly racking up video play requests. The dicovery cast a spotlight on a big and growing problem for the mobile ad industry: sophisticated invalid traffic, or SIVT.

Digital ad fraud costs consumers, advertisers, and publishers billions of dollars per year. One estimate suggests that digital ad fraud will cost advertisers $44 billion globally in 2022, more than double the $19 billion estimated for 2018.

The problem is described more fully in the article linked below.

Feb 9, 2020 | Link | 0 Comments
Security guard assault on teen characteristic of Brazilian racial history
Social media recently carried video footage of a black teenager being whipped by security guards at a supermarket in Brazil. Commentators asserted that the event was no surprise in a large country still tormented by legacy of slavery.

Sep 4, 2019 | Link | 0 Comments
White Supremacist Sentenced for Killing of Black Teen
In one of those times when justice prevails, it has been reported that a white supremacist who killed an Oregon teen in a hit-and-run attack has been found guilty of intentional murder and sentenced to life with a minimum term of almost 30 years.

"Courtier and Colleen Hunt were in a Jeep driven by Courtier in August 2016 when he was encouraged by Hunt to drive into Bruce after the two fought outside a convenience store in the Portland suburb of Gresham, authorities have said. "

Here's an inspiring story about one young man who's creating a service to his community by organizing a volunteer lawn mowing service for the elderly and disabled. Source: Huffington Post

May 6, 2016 | Link | 0 Comments
Ugandan Artists Teach, Protect Kids
Tom Herriman, former union organizer and publisher, has for several years taught English and music in Uganda for several months each year. We are pleased to call attention to a related effort that deserves your consideration. To wit:

Oakland • Sept. 16, 2013 • Opportunities for self expression and creativity are essential to a good quality of life. A group of artists I met in Uganda recognized this and began sharing their skills and their paints and brushes with kids in the neighborhood. It was informal at first. The kids would show up at James Nsamba's tiny studio every morning, brimming with energy and curiosity. James and Farouk Mukwaya would hand out paper and paint and colored pencils...then give the kids some basic lessons in how to use art materials to express ideas and feelings.

Gradually we got more organized. We call ourselves Uganda Art Consortium. We started a website, and we're part of Kisa Foundation USA, a 501 (c) (3) charity.

Sep 17, 2013 | Link | 0 Comments
Haiti Earthquake: You can help!
The January 12 earthquake in Haiti has created a humanitarian crisis that may well exceed any such event in the history of the western hemisphere. Even the low estimates of death and suffering are staggering.

AABL encourages you to contribute to relief efforts. There are several easy ways to do this:

For those able to do so, there is no limit on the number of text messages ($10 bills) you can send or monetary donations you can make.

Caution: Numerous scams have already appeared. Don't compound the tragedy by replying or responding to email or telephone solicitations. Don't click "Donate Now" links in email messages. If you want to donate to an organization, type its website address directly into your Web browser and press Return. Or make a donation by telephone. We vouch for the websites linked from this article.

Emma Faust Tillman, who was born near Greensboro, North Carolina, on November 22, 1892, became the world's oldest person on Wednesday, upon the death of Emiliano Mercado del Toro, of Puerto Rico. Guiness reported the news on its web site.

You have no doubt heard about "social networking" sites like Myspace and Facebook. They offer to millions of users ways to communicate as individuals and within groups. Very cool.

AABL will soon offer many of the same features, focusing on our core topics of business, community development and outreach.

Posted by michaelt - Dec 21, 2006 | Link | 0 Comments
Clarence Thomas at NYT
The New York Times compiles stories on well known individuals who have been covered in the newspaper. As a sample, here's a link to Supreme Court Justice Clarence Thomas.

May 10, 2006 | Link | 0 Comments
Homage to Coretta Scott King in Atlanta
ATLANTA Feb 6, 2006 (AP)--Coretta Scott King remembered at church where husband preached--Hundreds of mourners joined family members and celebrities at Ebenezer Baptist Church on Monday to pay their respects to the "first lady of the civil rights movement," Coretta Scott King.People lined up for blocks outside the church's historic sanctuary, waiting for hours in freezing rain. -As reported in ABC News.